Acute Bovine Liver Disease (ABLD) is a relatively recent condition that we are still learning about. It is currently notifiable as the DPI are trying to collate as much information about this condition as possible. With the relatively mild summer and associated growth, and warmth and moisture around, it is possible ABLD could arise on farms this year.

ABLD was previously known as phytotoxic hepatitis, is a disease of beef and dairy 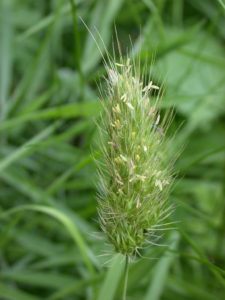 cattle. Outbreaks have been recorded in South Australia, SW Victoria, Tasmania and NSW. The actual cause of the condition is unknown, but it is associated with the presence of the native grass Cynosurus echinatus (Rough Dogs Tail). However, it is unknown whether the plant is directly involved or whether it is merely an “indicator” of some other factor.

Cases of ABLD are usually associated with the introduction of cattle onto less fertile paddocks (or parts of paddocks) which have dry feed containing Rough Dogs Tail still standing from the previous spring/summer and with green grass growing underneath.

It seems together with the correct weather conditions, this creates the right environment for the disease to develop. Signs of ABLD may be observed within hours of introducing cattle to the affected paddock, or may not develop straight away.

Signs of the Disease

Signs are variable – but as the name suggests are related to liver disease.

There is no known cure for the condition. The damage to the liver is done by the time the disease is discovered, so treatment is supportive only. Although recovery is normally prolonged, early intervention by a vet and the use of medications such as anti-inflammatories, anti-histamines and zinc may assist in recovery.

Affected animals should be provided with shade and easy access to drinking water, and may require hand feeding. Skin treatments particularly those containing zinc and lanolin may help if applied to affected areas of skin. Severely photosensitized cattle may have to be humanely destroyed.

Surviving cattle generally have a prolonged recovery. Areas of affected skin eventually slough and may become infected. A drop in milk production can be significant and if teats are involved, mastitis may occur.

Paddocks remain “toxic” for variable amounts of time (generally it seems only hours but may be longer) following an ABLD event. ABLD has been reported on the same paddocks in consecutive years.

The main aim is to prevent summer residuals containing Rough Dogs tail in paddocks as you enter autumn and early winter.

Cows that eat too much grain do not always get sick straight away. The stomach which initially digests the rumen is damaged by the acid produced by the grain breakdown and bugs escape over the rumen wall.

The closest organ to the rumen is the liver, so the bugs often form abscesses in the liver. The liver does not work properly so the cow is a poor doer without any really obvious signs. We have found a liver abscess when doing an LDA surgery.

The bugs which migrate often form an abscess close to the main vein which returns blood to the heart. Bugs then migrate into this blood vessel and are spread through the lungs. The bugs getting into the lungs can cause a few different problems: 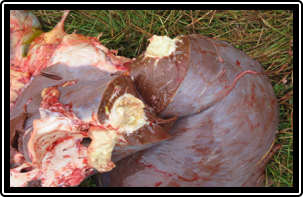 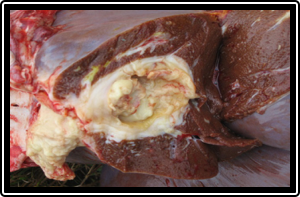 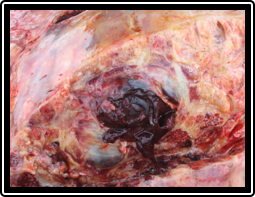 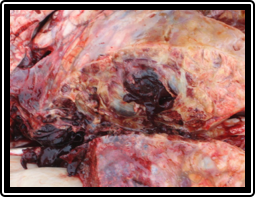