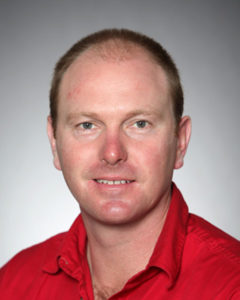 It is with a lot of sadness that we will be losing Jon from Warrnambool Veterinary on July 21.

Jon and his wife Jenny (who work at Warrnambool from 2000 to 2003) arrived in Warrnambool in 2005 after working in the UK, at Colac and Mt Gambier. In the last 12 years, they had had three children and established a strong presence in the Allansford community.

Jon became a partner in the practice in 2007, and has driven the cattle side of the business to be one of the strongest in Victorian dairy practices. He has had a special interest in dairy cattle reproduction, and many of our clients will have been involved in trials Jon has designed and implemented. As a result of these trials, we now have a much better knowledge of the factors contributing to non-cycling cows in dairy herds, and have been able to demonstrate effective treatments for this group of animals.

As part of the dairy cow fertility issue in dairy herds, Jon was one of the first to realise the potential of using heifer management to drive improvements in overall herd fertility. By undertaking trials looking at the effect of bodyweight on heifer fertility we are able to make sound evidence based recommendations on heifer management to achieve high fertility and productivity. From these trials, the Correct Weight program evolved with its associated benefits for our clients. Jon has also undertaken trials of the 10 day fixed time AI program we have recommended for many years, and has proven its benefits in both sexed and conventional semen when used with well grown heifers.
As well as undertaking these trials Jon has been instrumental in the implementation of practices that are now mainstream in the dairy herds we service. These include ultrasound pregnancy diagnosis, metrichecking whole herds and adapting various cow synchronising programs so that they are tailored to individual herd. Key to proving that these practices are both beneficial and profitable for out dairy clients, Jon has been instrumental in ensuring that excellent records of the events that occur in the joining periods of each dairy herd have been collected so that they can be analysed to a assess the success of the programs employed and to make recommendations for the next joining season. 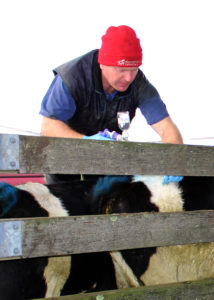 Allansford Recreation Reserve Community Farm in 2014. Since it started the farm has been getting bigger and better, and this year are will be turning off 100 Friesian bullocks that have been donated by local farmers as calves. The farm provides an important source of funding for projects associated with the Allansford Recreation Reserve, culminating with the construction of new netball courts in 2017. Jon’s contribution to this important community project will be missed.

We wish Jon, Jenny, Zara, Isabelle and Fraser all the best as they travel around Australia for an extended caravan expedition, and hope to see them back in Warrnambool in a couple of years’ time. We are sure all of our cattle clients will thank Jon for the great work he has done with them over the last 12 years.