Myxomatosis and Your Rabbit

Mosquito-borne diseases on the rise in local pets 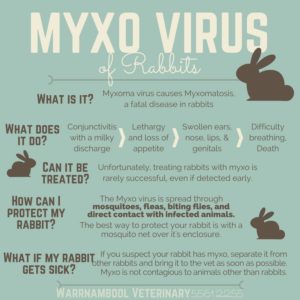 High rainfall this Spring and Summer has seen an increased incidence of rabbits presenting to our clinic with signs of Myxomatosis due to the rapid growth of the mosquito population.

The disease is caused by the Myxoma virus and is spread to rabbits via mosquitos and rabbit fleas.

Symptoms of the disease are redness and swelling of the eyes, mouth, nose and genitals with a white discharge developing as the disease progresses.

Rabbits will then develop a very high fever, lose their appetite and appear listless. Death will occur within two weeks in 96-100% of cases. With such a poor prognosis, treatment is generally not recommended and the rabbit should be taken to the vet for euthanasia.

There isn’t a vaccine available in Australia for Myxomatosis and so our focus is on prevention of mosquito or flea bites.

All hutches should be covered with insect-proof netting and rabbits should be kept inside from before dusk falls, when mosquitos are active. 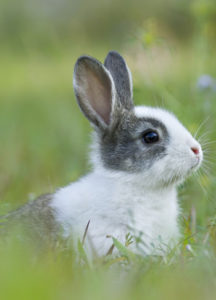 Repellents can be used near the hutches including preventatives such as mosquito coils and citronella candles. Ensure there isn’t stagnant water laying around your garden for mosquitos to breed in. Some of the cat and dog spot-on flea treatments can be safely used “off-label” in rabbits to prevent fleas.

Speak to one of our vets for advice on treating your rabbits for fleas as some products are lethal, for example products containing fipronil. If your rabbit has become infected, separate it from other rabbits. Because the virus can survive in the environment it is not recommended to introduce a new rabbit for at least four months after thorough disinfection of the hutch and feeding equipment.

The other major killer of rabbits is Calicivirus which causes internal bleeding. All pet rabbits should be vaccinated annually against this disease.

To make an appointment for your rabbit call our receptionists on 5561 2255.