Perennial Rye Grass Staggers (PRGS) is a common condition of cattle, sheep, camelids, and horses in Victoria and New South Wales. It occurs in late summer and autumn and is caused by a fungus found within the rye grass plant. 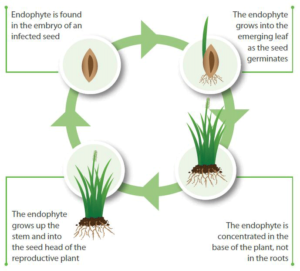 Perennial rye grass staggers is caused by toxins produced by the fungus Neotyphodium lolii. N. lolii is an endophytic fungus, living within the cells of perennial ryegrass plants. The fungus does not harm the plant, and in fact has many known benefits including increased resistance to insects and drought. N. lolii is most concentrated at the base of the plant (see illustration), which is why signs are usually seen in livestock only when pastures are short, in late summer and autumn.

How can I identify affected animals?

Stock grazed on pastures containing N. lolii may exhibit signs of perennial rye grass staggers within 7-14 days of exposure, with younger animals more severely affected. Identifying affected animals may be tricky, particularly when observing livestock from a distance. However, when the animals are put under physical stress such as herding, clinical signs become obvious. A stiff gait and lack of coordination may progress to tremoring, staggering, and collapse. Signs may also be exacerbated by heat stress.

While PRGS itself is not fatal, severely affected animals often die of accidental causes, such as dehydration or starvation due to their inability to stand, predation, or drowning in an open water source like a pond.

No specific treatment for signs of PRGS exists, unfortunately. Steps can be taken, though, that will minimize death loss and aid in recovery of affected animals. Animals should first be removed from the offending pasture. Since stress dramatically worsens signs, special care should be taken when moving livestock, and the use of herding dogs should be avoided. If other pastures are not available for grazing, feed should be supplemented to reduce pasture intake. Livestock that are down should be provided feed, water, and shade, if possible. Dairy cows that go down in the milking shed should be left alone, as they usually recover and can walk out on their own within an hour or so.

Pasture management is key in preventing perennial rye grass staggers. Since the ryegrass plant and N. lolii have a mutually beneficial relationship, grasses available without the fungus do not thrive as well as those with it. Over-grazing can cause animals to graze the base of the plant, where the toxin concentrates, so care should be taken to keep pastures leafy, if possible. Removal of dead litter and cultivation of clover in the pasture can reduce toxin intake as well, though this is often difficult in dry summers. Supplementation of non-contaminated feed such as maize, grass silage, Lucerne hay, and Brassica crops can help to limit intake of rye grass.