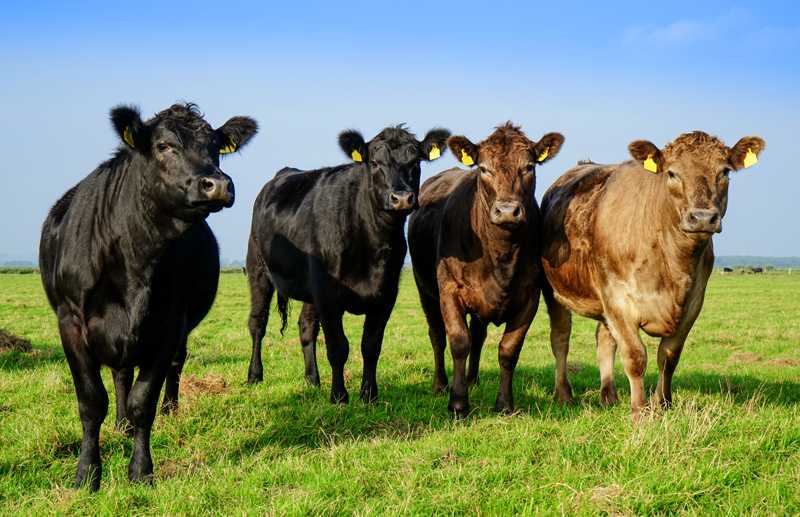 As we come to the end of winter and spring approaches, it is time to think about how the change in season can affect the burden of internal parasites in weaned stock. This article discusses the common gastrointestinal worms and how they can affect cattle, especially young stock.

Gastrointestinal worms in cattle are divided into nematodes (round worms), cestodes (tapeworms) and trematodes (flukes). They are assigned to one of these groups according to their structure. Within each group, the life cycles and growth of the parasites are generally very similar and different from those of the other two groups. The nematodes are the most economically important internal parasite of cattle. Tapeworms play a minor role and flukes cause significant economic losses in some geographic areas.

The nematodes (round worms)

The small brown stomach worm, Ostertagia ostertagi, penetrates the lining of the abomasum (fourth stomach) causing severe damage and inflammation. Infected heifers have a severe scour, inappetence, anaemia and weight loss. Cattle up to 18 months old can be affected. This parasite can enter an arrested phase of its lifecycle which can then resume 3-9 months later. This type of disease can cause significant losses in young heifers as the worm larvae emerge.

The Barbers Pole worm, Haemonchus placei, thrives in the warmer climates of NSW and QLD. This blood sucking parasite also inhabits the abomasum and causes severe anaemia and loss of protein. This results in the characteristic ‘bottle jaw’ appearance with affected cattle being weak and slow to move.

The stomach hair worm, Trichostrongylus axei, is the last of the common abomasal nematodes. It also damages the lining of the abomasum causing inflammation and reduced absorption of nutrients. The stomach hair worm is often diagnosed in mixed worm burdens and exacerbates the severity of an infection.

The main species of small intestinal worm affecting cattle is Cooperia spp. These worms are often present in mixed infections and they are prolific egg-layers. Affected animals will have diarrhea, poor weight gain and inappetence.

Both the liver fluke (Fasciola hepatica) and the stomach fluke (paramphistomes) require a particular species of aquatic snail in order to complete their complex life cycle. For this reason cattle become infected in only certain regions of Australia where these snails co-habit. Liver fluke infection results in significant damage to the liver tissue and bile ducts which causes irreversible scarring. Signs of liver fluke include inappetance, weight loss, ‘bottle jaw’, anaemia, jaundice and death.

These worms are long and segmented, measuring up to 6 metres in length. They commonly inhabit the small intestine but their presence is usually of no consequence, having little ill-effect on the animal. Heavy worm burdens may compete for nutrients and interfere with gut motility leading to poor weight gain. The main concern with tapeworms in cattle is from a human health perspective. Cattle can serve as an intermediate host in the lifecycle of the human tapeworm, Taenia saginata. This is not commonly diagnosed in humans but remains an important zoonotic disease across the globe.

The impact of gastrointestinal worms in cattle

As described, the clinical signs of gastrointestinal worm burdens include weight loss, ill-thrift, diarrhoea and dehydration. Research has shown that even low-level infections can have a negative effect on productivity in young animals, such as dairy replacement heifers. These heifers may not show overt clinical signs and thus are described as having subclinical infestations. They may have a suppressed appetite and reduced productive grazing behavior, leading to reduced feed intake and growth. Worm larvae cause a significant immune response which can lead to chronic inflammation and gut hypersensitivity. Young, growing heifers are highly susceptible to gastrointestinal parasitism and the production losses in this group of animals will be the greatest. If there has been sustained exposure to worms, adult cattle will generally develop good immunity by 18 to 20 months of age.

Understanding the species of worm affecting your cattle is essential in selecting the most appropriate drenching strategy. A spot drench test will providing this information, along with an assessment of how effective your current drenching program is.

Speak to your vet about organizing a spot test during your next planned drenching.