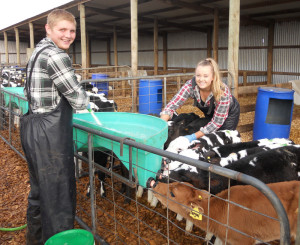 Kirsty Wickham is the daughter of dairy farmers Geoff and Vicki Wickham, who milk 900 cows at Nullawarre. Kirsty is undertaking her gap year experience before heading off to Melbourne to study next year. Ryan Mortimer originates from County Derry in Ireland, and is part way through an Agricultural Technology degree at Queen’s University. As part of his studies Ryan is required to complete a unit of study, and has decided to do a report examining heifer rearing in western Victoria.

Both had never reared a calf in the lives … Until this year.

The Wickhams start calving their heifers around March 1 each year. The cows start calving from the beginning of April and finish towards at the end of June. In 2015 nearly a thousand cows will have calved. To prepare for the calf rearing season, Kirsty and Ryan attended the Calf Rearer School run by Warrnambool Veterinary in March. This provided the technical information required to successfully rear calves, as well as having a practical component showing students how to stomach tube young calves.

For the first time, Geoff and Vicki decided to vaccinate their adult herd against calf diarrhoea, using the recently introduced Ultravac Scourshield® vaccine. Given correctly to cows, the vaccine greatly increases the amount of antibodies in colostrum against E.coli, rotavirus and coronavirus which are all important causes of disease in young calves.

Results from Kirsty and Ryan’s first year experience are impressive. To date, over 400 heifer calves and 11 bull calves have been reared, with few losses. There have been five deaths, with none associated with scours. There have been less than ten scour cases in total, with only two calves needing to be treated with electrolytes in the first 300 calves.

Kirsty and Ryan test colostrum with a Brix refractometer, which provides a reliable measure of colostrum quality. Only colostrum with a brix reading of 22 or greater is fed to calves. Two litres are stomach tubed to each calf on the first day, with a second treatment the next day. Kirsty has found that cows normally produce the best colostrum, with only a few heifers producing colostrum with a reading over 22. Calves then go onto four litres of milk per day, with access to grain after 4-5 days.

After 4 to 5 weeks, calves are moved out of the shed to the calf paddocks where they continue to be fed milk and grain, and are provided with a fibre source. Calves are then weaned from milk when they are eating more than a kilogram of grain mix. 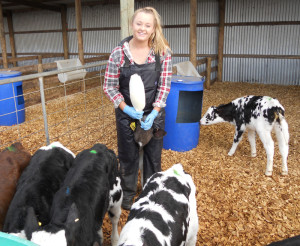 A key to the success has been Kirsty’s attitude to calf rearing:

“The best bit has been looking after the younger calves. I have some favourites but they are all my ‘babies’!”

“I found it very interesting learning about calf health and feeding, and the benefits of colostrum”.

Ryan will use some of his experiences when he produces his research project report.

“Calf rearing has been made so much easier this year because there has been less scours in the calves. The Scourshield vaccine has made a big different to the time and effort to look after the calves”. 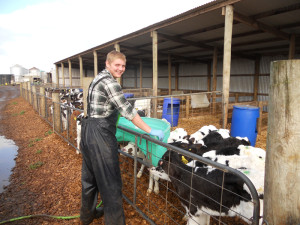 Calves received their first 7 in 1 vaccination in early June, when they were disbudded by Warrnambool Veterinary using sedation and pain relief. Over three days 382 calves were veterinary disbudded, with little pain felt by the calves, and little stress being felt by farm staff.

Kirsty and Ryan have set a difficult example for Geoff and Vicki to follow in 2016. A similar number of calves are likely to be reared.

“I hope to have someone helping me who cared about the calves as much as Ryan did. But I might have to bring Kirsty back from university for a few months to take control of the calf shed”.

The success of the calf rearing program at the Wickham farm has been attention to detail, and a keen interest in rearing healthy calves. Use of the Scourshield vaccine has made life easier, but strict criteria for colostrum quality, and feeding the calves well from birth has played huge dividends for the number of replacements available to Geoff and Vicki.