A new disease in dairy calves has been recognised in Victoria and other states in the last 18 months.

Called upper alimentary tract ulceration syndrome, the condition appears as “ill-thrift” where calves perform poorly despite receiving adequate nutrition. Testing so far has revealed the normal causes of ill-thrift in calves to be absent: these include worms, salmonella, coccidiosis, yersiniosis and pestivirus. Calves respond poorly to antibiotics or treatments for coccidiosis. Warrnambool Veterinary has investigated two cases in the last 18 months.

A feature of the disease is ulceration of the tongue and mouth (similar in appearance to pestivirus (or BVDV) infection). When these animals are autopsied, as well as ulcers in the mouth, there is ulceration of the oesophagus, and damage to parts of the small intestine. In outbreaks investigated in Victoria, up to 60% of group have been affected, and 10% have died or have had to be euthanased.

Scientists at the DPI Veterinary Laboratory at Bundoora have identified a virus which may be responsible for the condition. To determine whether the syndrome is caused by this virus, samples from more affected calves are required. If you have calves that appear to be performing poorly, have weight loss, and suffer diarrhoea unresponsive to normal treatments, or have inflammation or ulceration in the mouth, please call Warrnambool Veterinary or the DPI to investigate further. 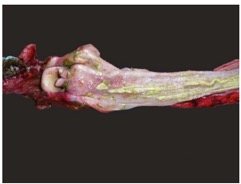 Subsidies are available to farmers to cover the costs of investigation and laboratory investigation. The more cases that are seen and submitted, the better the chance of either discovering the cause or identifying risk and management factors so that the disease can be prevented in the future.