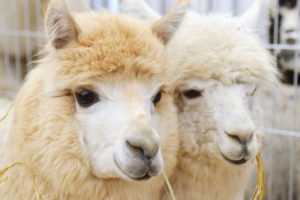 Barbers pole worm – or more correctly Haemonchus contortus – is not usually a problem in south western Victoria. However, over the last few years we have seen isolated cases in spring and autumn. Barbers pole worm likes wet warm conditions and this has been the case in some recent seasons. Populations can build quickly because of the worms’ huge egg output.

Barbers pole worms are large, blood-sucking worms which can quickly suck blood causing severe anaemia and rapid death in both sheep and alpacas.

The barber’s pole worm (BPW), Haemonchus contortus, is quite long (20 to 30 mm) and clearly visible. Only the adult female has the characteristic ‘barber’s pole’ appearance due to the pink (blood-filled) intestinal tract of the worm twisted around the paler reproductive tract. The male worm is smaller (around 15 mm) and pale pink.

Females are prolific egg layers, laying up to 10,000 eggs per day. BPW eggs require warm, moist conditions to hatch. Once hatched, however, they develop into tough larvae that can survive for months on pastures before being ingested by grazing sheep or alpacas, where they then grow into blood-sucking adults.

Adults can become arrested or inhibited inside the sheep for varying periods. They resume activity when environmental conditions become more favourable or when ewes have lowered resistance around lambing time.

Because they are blood-sucking worms, clinical signs include:

The only accurate way to diagnose worm infections before productivity losses have occurred is to conduct a worm test (worm faecal egg count). A larval culture is usually recommended in areas where barber’s pole worm is common and in other areas, under wetter than normal conditions, when barber’s pole worm can become a problem.

On post mortem, the worms are visible to the naked eye.

Drench resistance is a major issue for BPW control. Talk to one of our vets about the best drenching strategy.

Since the problem is sporadic in our area, a full control program is not required. Regular WORM EGG COUNT would alert you to a likely problem because the large egg output is typical of the worm. If you have sheep or alpacas which show the other clinical signs, discuss the situation with one of our veterinarians.