In our seasonal calving system, a key factor for production is ensuring cows get in calf as early as possible in the joining period. This means the cows need to be cycling as soon as possible after calving. Nutrition and ensuring heifers are well grown are critical factors. This also means the bulls need to be fertile to ensure the cows get in calf as soon as possible.
A full bull breeding examination requires bulls to meet a set of standards for key fertility components. Passing these components increases the probability of the bull being fertile.

The components of bull fertility testing are: 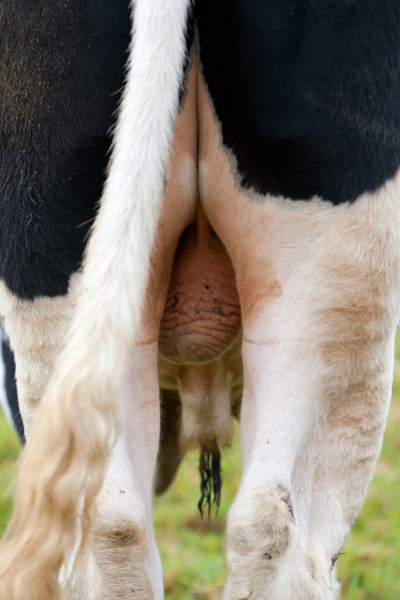 A summary of the four components of bull fertility examination follows:

Scrotum - Scrotal circumference/size in centimetres where testes shape is within normal range. The minimum values depend on breed and age of the bull.

Physical – Within the constraints of a standard examination, there is no evidence of any general physical/structural condition or of a physical condition of the reproductive tract indicating sub-fertility or infertility. This evaluation will identify structurally unsound bulls in legs, feet, sheath and general structure.

Semen – Crush-side assessment indicates that the semen is within normal range for motility, colour and percent progressively motile and is suitable for laboratory evaluation.

Can we examine and categorize the semen produced by a bull?

Yes. Many breeders will be aware that upon the collection of semen either by electro-ejaculation or rectal massage, semen is examined crush-side for colour (no blood or urine staining allowed) and density of spermatozoa which is ranked on a 1 (clear to cloudy) to 5 (thick creamy colour) basis. In addition, when using low power magnification, the amount of swirl or vigorous swimming motion of all the spermatozoa is scored on a 1 (no swirl; generalized flickering of individual sperm only) to 5 (fast distinct swirl with continuous dark waves) basis. Once completed, the percentage of individual sperm that are swimming forward freely and independently is recorded. In addition, the sample must be free of large numbers of pus cells.

In the bull, normal morphology is heritable, highly repeatable (doesn’t change much year to year), can be used to predict the quantities of calves the bull can produce and can even predict the fertility of his female offspring. The heifer’s age at puberty and her time between calving and cycling again, reflect the morphology of her sire. The selection of bulls with high normal semen morphology counts results in increased calving rates, tighter calving periods, reduced empty cows, increased weaning weights and faster rates of genetic gain. The stocking rate of bulls to females may also be lowered.We often find semen appears to be normal at the crush-side examination, but is abnormal when morphology is done.

Bulls which do not qualify by morphology standards may still result in a large number of calves on the ground, but these calves may have come at a high cost. There may be an unacceptable high rate of empty or dry cows, and the cows may have lost one or two embryos during the mating season prior to maintaining pregnancy. The delays in pregnancy result in smaller calves at weaning, and there is increased pressure on the cow to achieve pregnancy the following year as she has a shorter recovery time post calving.

A frequent concern by producers is – why do subsequent samples from the same bull differ in % Normal sperm? Why do Samples from Bulls at  Different Times Vary? OR Why does bull fertility vary?

So morphology results can also reflect recent illnesses, transport stress, lameness and high grain diets, all of which have may only have a temporary effect on fertility. As a result, repeat tests may be required on bulls with defects on the initial exam. The morphology result is an indication of the quality of the semen at that point in time alone. However, if the percentage normal is high, the bull has somewhat more of a buffer and can afford to decrease more in percentage normal as a result of stress than a bull that inherently / genetically produces low percentage of normal semen.

Similarly, young bulls may occasionally have defect semen which is reflective of their sexual immaturity.

Just because a bull has four legs, a head and a set of testicles, it does not necessarily mean he is permanently a functional bull. How he is handled, what stressors he has undergone, the level of nutrition available and other factors can all have a strong effect (either positive or negative) on the ultimate fertility and functionality of that bull, and his fertility is dynamic, meaning it can change due to these and other stressors / circumstances.

Relocation to a new environment, subjecting bull to new viral and bacterial challenges, fighting and other issues associated with establishing new social groups, could all have often unseen impacts on semen quality. These impacts then flowed through to fertility in the herd.

Where possible, incoming bulls should be kept with animals of similar age, and bulls coming from very different geographic and climatic environments, should be relocated much earlier than those animals bought from a similar environment to your herd. Even within genotypes, some bulls adapt to more stressful environments more readily than others -these being more likely to have their semen quality affected.