What does colostrum quality mean?

What affects the quality of colostrum produced?

The production of colostrum in the udder commences approximately 4–6 weeks prior to calving. Therefore, the length of the dry period can significantly affect the quality of colostrum. Dry cow nutrition, transition management, accurate dry off dates from pregnancy testing, teat sealant and strategic vaccination where appropriate, are all integral components of a colostrum management program.

The time between calving to first milking has a negative effect on colostrum quality. Colostrum quality in the udder rapidly declines at the point of calving and research shows that colostral IgG concentration decreases by 3.7% for each hour after calving. Cows and heifers should be collected from the calving area at least twice daily and milked as soon as possible. If cows are only collected once daily from the calving area, collection of the best possible colostrum has not been achieved.

Pooling colostrum is the mixing of colostrum produced by different cows and heifers, after collection. The logic behind this was that it was supposed to minimise the impact of low-quality colostrum samples. Unfortunately, this actually results in reducing the overall quality of the pooled sample, as good quality colostrum is now diluted with poor quality, and overall IgG concentration is less.

In reality, colostrum quality is highly variable from farm to farm and from cow to cow.

How do I measure colostrum quality?

Direct measurement of colostral IgG can be carried out at a laboratory. This is considered the ‘gold standard’ to which other indirect tests are compared.

However, the direct measurement of colostral IgG on farm is almost impossible in terms of practicality, cost and processing time. Indirect measurements of colostrum quality have been described, such as visual inspection, the use of a colostrometer and more recently the Brix refractometer.

Colostrometers are reasonably quick to use on farm but do have some limitations. They are significantly affected by temperature and for a known quality of colostrum, the colostrometer can differ by 0.8mg/ml for every degree Celsius change in temperature. They are also very fragile which can make them unsuitable in a farm environment.

The Brix refractometer is available in both optical and digital forms. A cut-off of 22% Brix is deemed to equate to a cut-off of 50g/L of IgG, thus samples 22% Brix are considered to be of adequate quality. The benefits of the Brix refractometer are that measurements are not affected by ambient temperature and they are robust, easy and economical to use on-farm.

How do I use this on my farm? 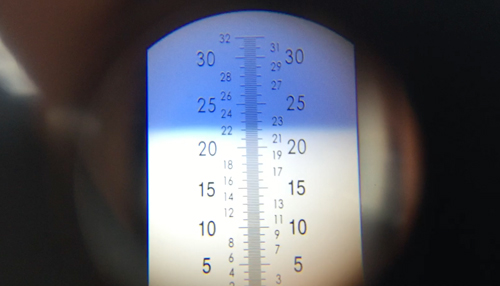 Pooling colostrum on farm is considered detrimental in terms of disease spread from cow to calf. However, sometimes pooling is unavoidable and a compromise needs to be reached. As a rule of thumb, “only mix like-with-like”. This means only mix colostrum that is 22% Brix, with colostrum that is also 22% Brix. This is the Grade 1 colostrum (good quality). And only mix poor quality colostrum that is <22% Brix with other poor quality colostrum which is <22% Brix. This is the Grade 2 colostrum (poor quality). Colostrum collection containers, such as bottles or Perfect Udder bags, are marked either Grade 1 or Grade 2 along with the date of collection. This system allows all staff to know exactly what the quality is, how much needs to be fed and the use-by date.

Brix refractometers, Perfect Udder bags and feeders are available through Warrnambool Veterinary, and our vets are happy to provide training on how to use them effectively. Please call the Farm Desk on 5561 7666 for more information.